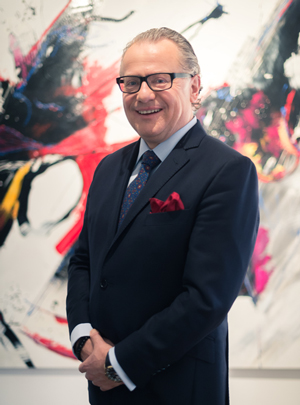 In mid-2014, Dirk Dewitte founded Dewitte & Partners S.A., a strategic management and economic advisory firm. This has been the outcome of his long standing experience as Senior Partner of Deloitte, one of Luxembourg’s most prestigious professional audit firms.

In his former capacity as Senior Partner of Deloitte, Mr. Dewitte was in charge of the outgoing business to China, Russia, the CIS and Central Europe. He also established and co-chaired the Luxembourg desk in China, which is now based in Hong Kong, and served as the EMEA Chinese Services Group leader at Deloitte Global where he developed a broad understanding of the business opportunities, expectations, and needs of Chinese private companies, State-Owned Enterprises (SOEs), and financial institutions.

In his current role as President and CEO of a private marina in the French Riviera, Mr. Dewitte enacts his knowledge of the maritime world and yachting industry, with a strong focus on marine and maritime financial management and structured finance. His expansive experience in this regard also includes the construction of marinas, the management of yacht clubs at an international level, assisting the building-out and developing of operational and financial structures of private marinas, and the funding and commercialisation of marina projects and private marinas.

From May 2013 to June 2019, it was Mr. Dewitte’s honour and privilege to serve as the President of the China-Luxembourg Chamber of Commerce (CHINALUX), and since June 2019, he has held the position of Honorary President of CHINALUX, alongside the Chinese Ambassador to Luxembourg, H.E. HUANG Changqing. CHINALUX is a non-profit, bilateral trade organisation, which has strategic members active in China and Luxembourg, and plays an important role in supporting business and cultural ties between China and Luxembourg.

Since 2013, Mr. Dewitte has been a Guest Professor of International Tax and Corporate Policy at the Catholic University of Louvain in Belgium.